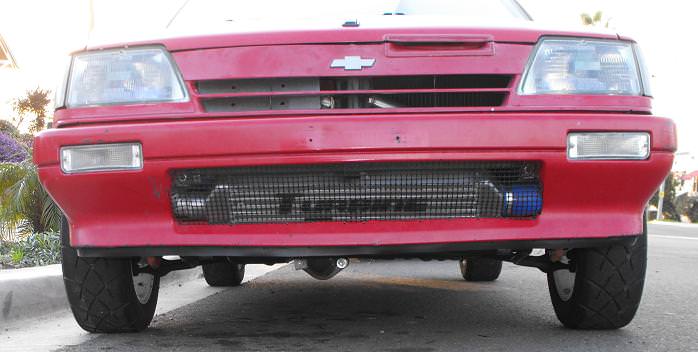 -  Mon Nov 02, 2020 11:40 pm #8974
So my turbo to downpipe gasket has seen better days.
When I got the last turbo kit from Jardamuth, just before they
scrapped their mock up car, it was a custom build with no
gaskets included. So I had to re-use the triangle gasket and
make my own downpipe gasket. I think I started with aluminum
sheet, then when that failed, I used copper sheet.
Now it’s failed again, so I got some thicker copper sheet hoping that
it will last a bit longer.

GASKET 3.jpg (278.21 KiB) Viewed 415 times
Mind you my first clue that it failed was exhaust fumes in the driver compartment.
I figured that my cheap CAT failed and exhaust was recirculating in through the
rear side vent windows, then my A/F meter was giving me whacky readings,
so I figured the sensor might be bad and ordered a replacement sensor for
good measure, in retrospect it was a fairly good leak due to the failed gasket
in close proximity to the A/F sensor.

I was told it was a K04 Turbo, so this time I got lazy and found a Mazda
gasket for KKK K04 turbo on eBay for pocket change and hoped for the best.
Well, the old adage measure twice, cut once applies here.
Not having my parts stash at work to double check, I figured I’d get
lucky for once and find a premium gasket without having to fab my own.
But my own fault, if I’d had double checked my template, I’d have known
it wasn’t the right one.

Long story short, the gasket was indeed toast well done.
After receiving a hopeful replacement that was totally wrong,
I got busy with the copper sheet and my old template and fabbed
up something workable.

GASKET 5.jpg (259.85 KiB) Viewed 415 times
I had been shopping the last year for my next project and had
an arsenal of header bolts, titanium nuts, copper plated lock nuts,
various studs and the like. But ultimately ended up reusing the
same hardware I had originally assembled with, some stainless
nuts/washers, stainless bolts and one original copper OEM copper
exhaust manifold nut. Though my best investment was an 8×1.25
bottom tap I used to clean out the threads which I picked up this
morning and made reassembly the most painless to date.
Along with the assortment of swivel sockets and stubby wrenches,
I had this done to my satisfaction in about 90 minutes and no
bleeding, just some dirty nails where my Nitrile gloves failed exposing
random digits.
Good to spend some time with this, I discovered loose valve cover bolts,
a broken custom nylon strap on the main intercooler intake tube, and traced
down some annoying rattles to be addressed on another day.
I’ve had much worse Mondays, this ended up all pretty good, crossing
something else off the endless ‘to do’ list.

What really blows me away is the way the gasket is really “blown out”,
simply exhaust flow and heat caused the metal gasket to essentially
blow out as you can see from the pics, between two bolted mating
surfaces.

-  Sat Nov 21, 2020 11:01 am #9038
Very cool! I was having a hard time finding some for my factory turbo…I think I sourced one, but the business was iffy and the price was steep. Mine were decent so I sprayed a few coats of permatex copper gasket spray and hope it seals. The more I dig, the more problems I find! What do you cut the copper sheet with?

-  Mon Nov 23, 2020 8:18 pm #9044
With the pattern on the sheet, I drilled the holes first making
sure to use some sacrificial wood backing.
Then a pair of Milwaukee tin snips did the rest, and once
I had it apart to check the fit, I used a file to clean up
the rough areas and fine tune the holes.
I had a better plan to actually use a drill press
and band saw, but ended up just doing it by hand.
ehits liked this

I got my shirts while I was away. They look great,[…]

I'm finally back home. I have barely been here sin[…]

Nachi and Koyo are both great bearings. Made in Ja[…]

Good luck in the lock down :-/