look up '‘pilot shaft bearing removal with bread’'
keep a low profile to minimize your existence . existence is pain

So, first I meant to include a picture of the old bushing in the last post, because you could see where the coating on the inside was damaged. This is what it looked like: 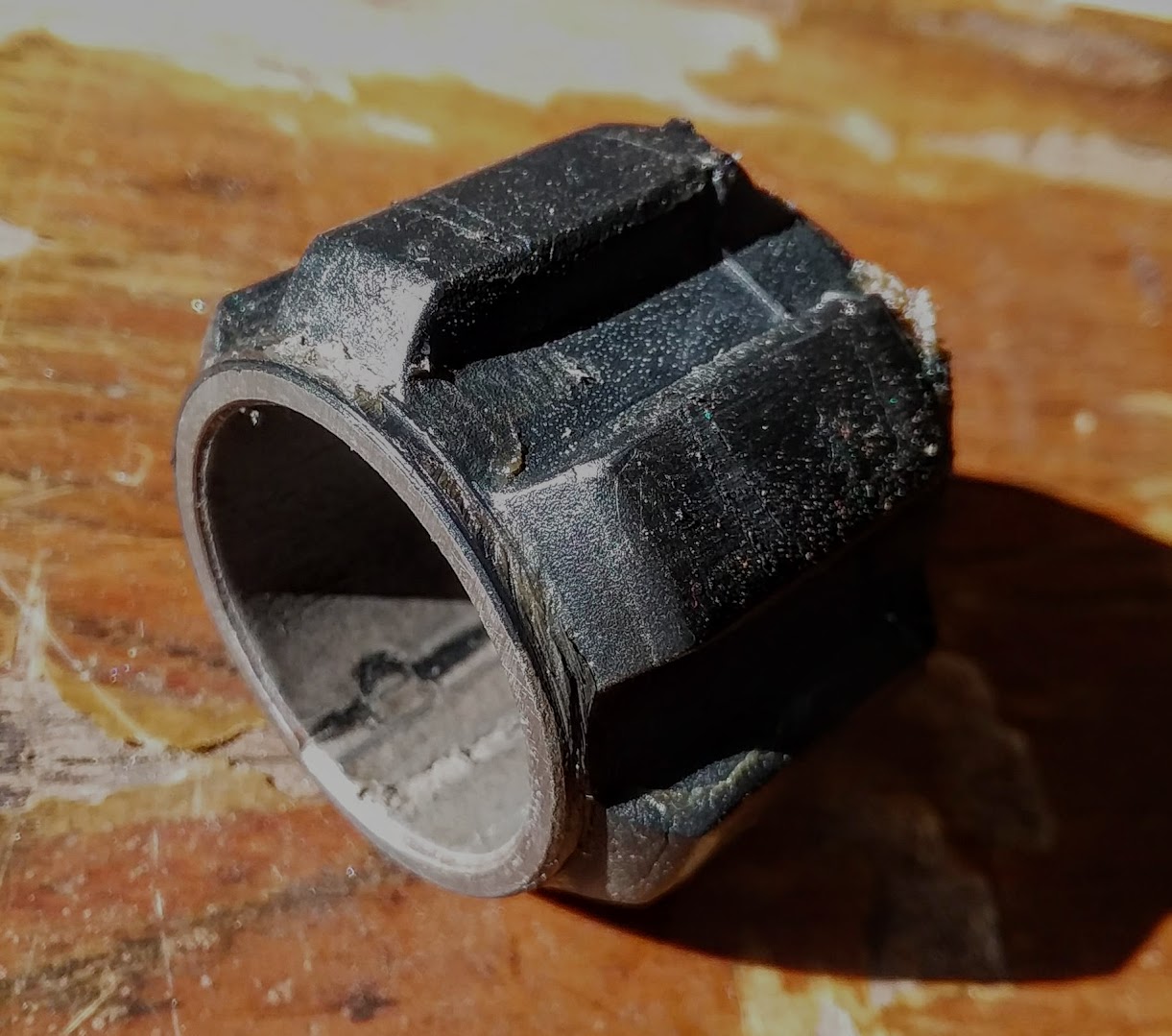 Against my better judgement, because I bought it, I decided I really was going to pull the old needle bearing and swap it. I’ve used the “white bread” trick before (works better with playdough, actually) but there’s almost no space in the cavity behind the bearing and I didn’t want to have to clean the mess out of the rack afterwards. I called a general auto machine shop, figuring they would have a blind-hole puller tool and their rate would be cheaper than buying a tool just for this job. But the shop said they didn’t have a tool and started talking about welding something to the race–and I decided that wouldn’t end well

So I bought one from harbor freight for a bit more than their hourly rate (after the typical discounts): https://www.harborfreight.com/slide-ham ... ing+puller

FWIW this is a terrible tool, lol. I found I had to modify the small attachment lip with a grinder for it to grab the bearing, and then I still had to heat the rack from the other side to get it to finally pop out. It is not made out of hardened metal–possibly it is made out of old cheese?

A center post expands the petals to grip the bearing, put the pulling force will drive the petals back into the soft metal of that post and lose grip. This is what I did to modify the tool: 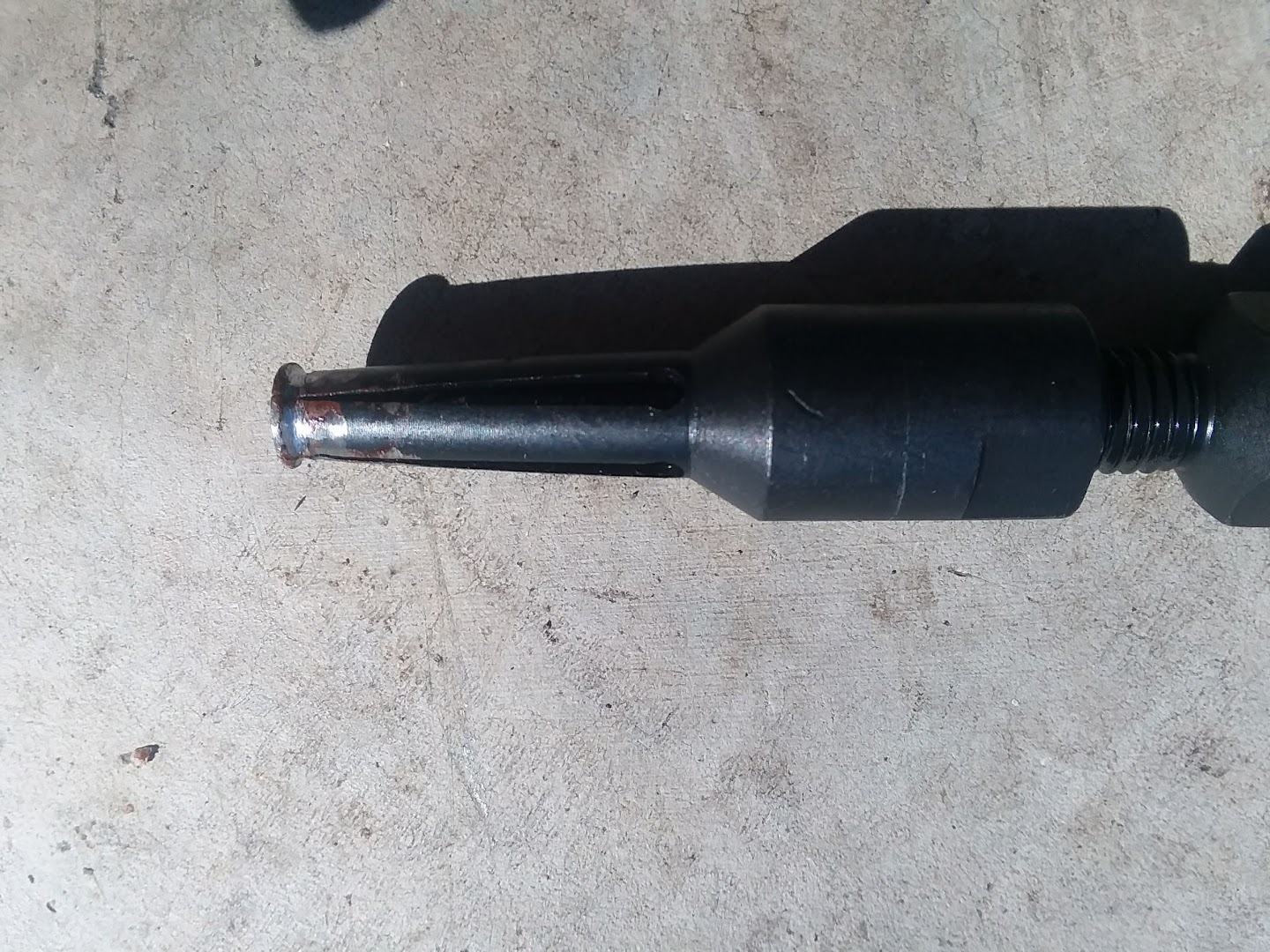 I also had to repeated grind out the “dents” the petals pushed into the center post and try again. To be fair, there’s almost no room behind the bearing–here’s a pic of where it sits in the housing once it’s removed: 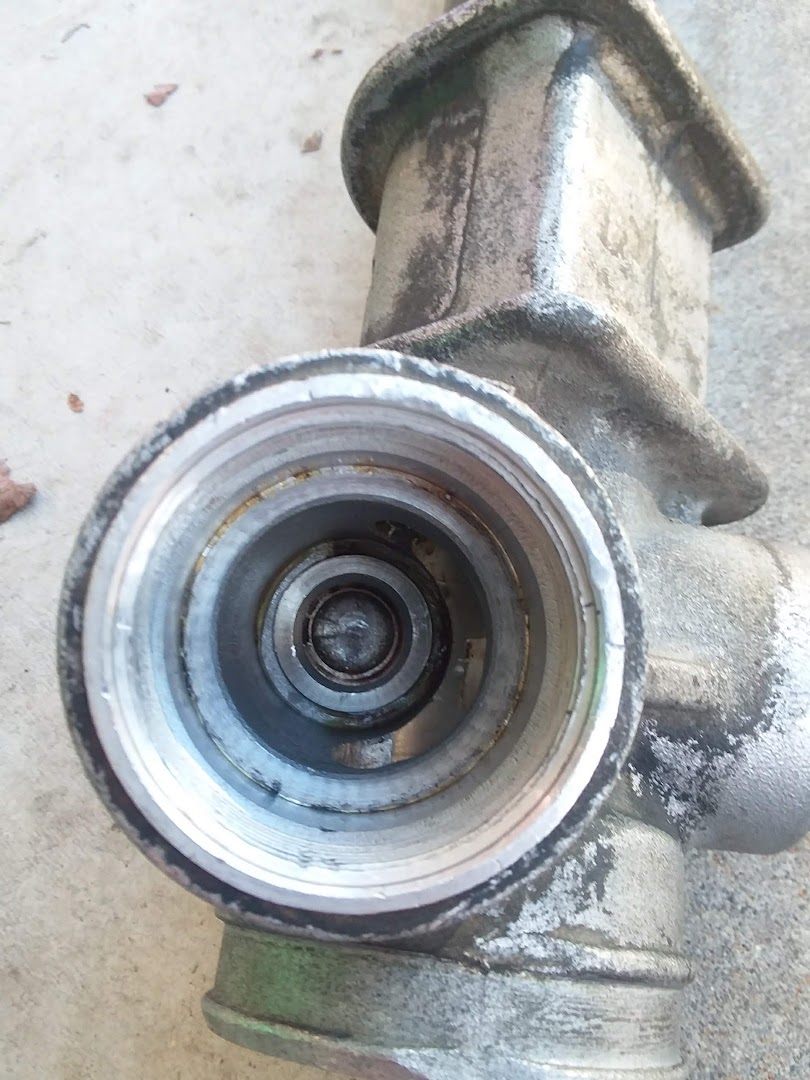 It actually only worked at all because I made the lip thin enough to grab underneath the bearing’s rollers. 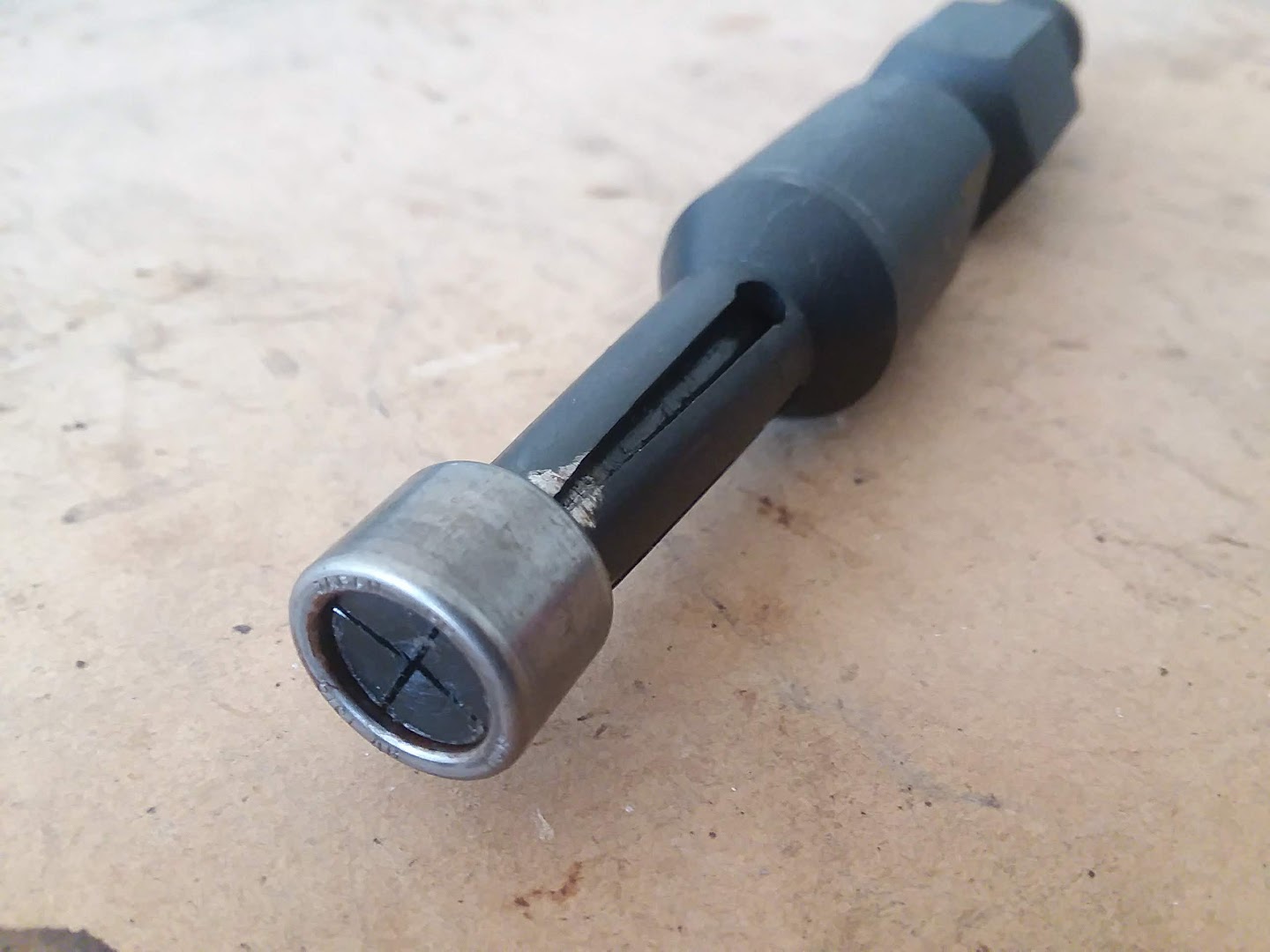 At least tapping the new one in was no problem. I did put the bearing in the freezer to help out, but that might not be necessary. The bearing press tool was much easier to fudge with a small socket. 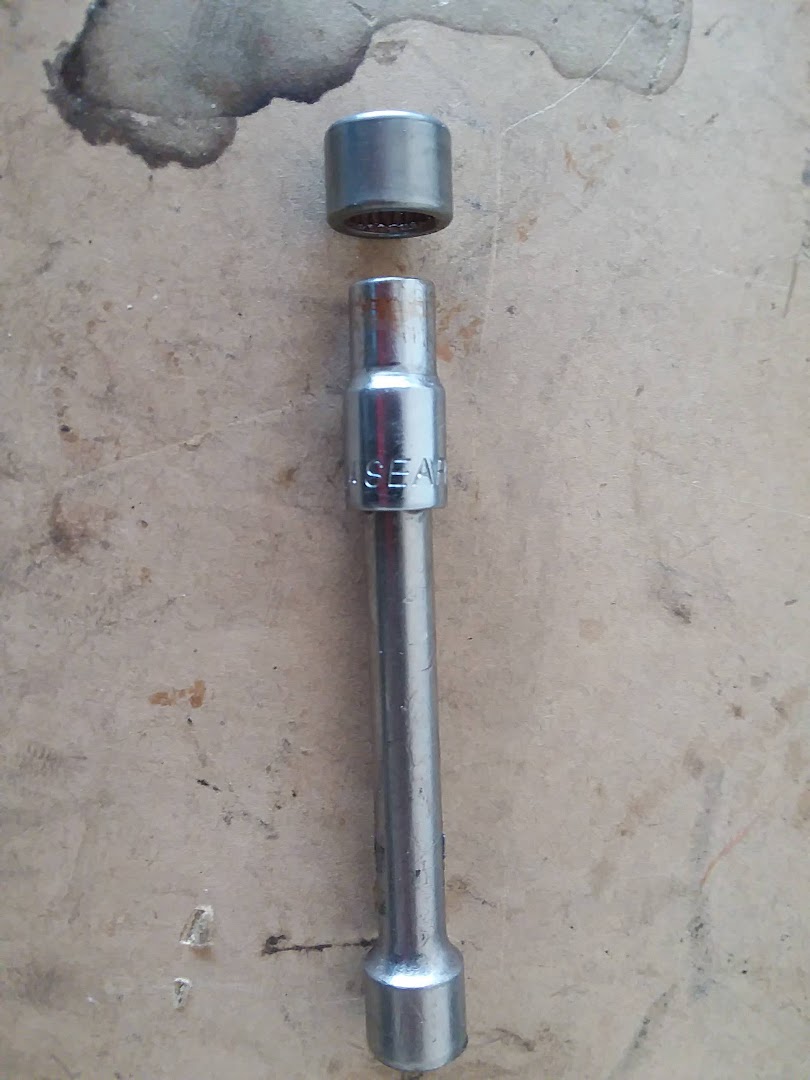 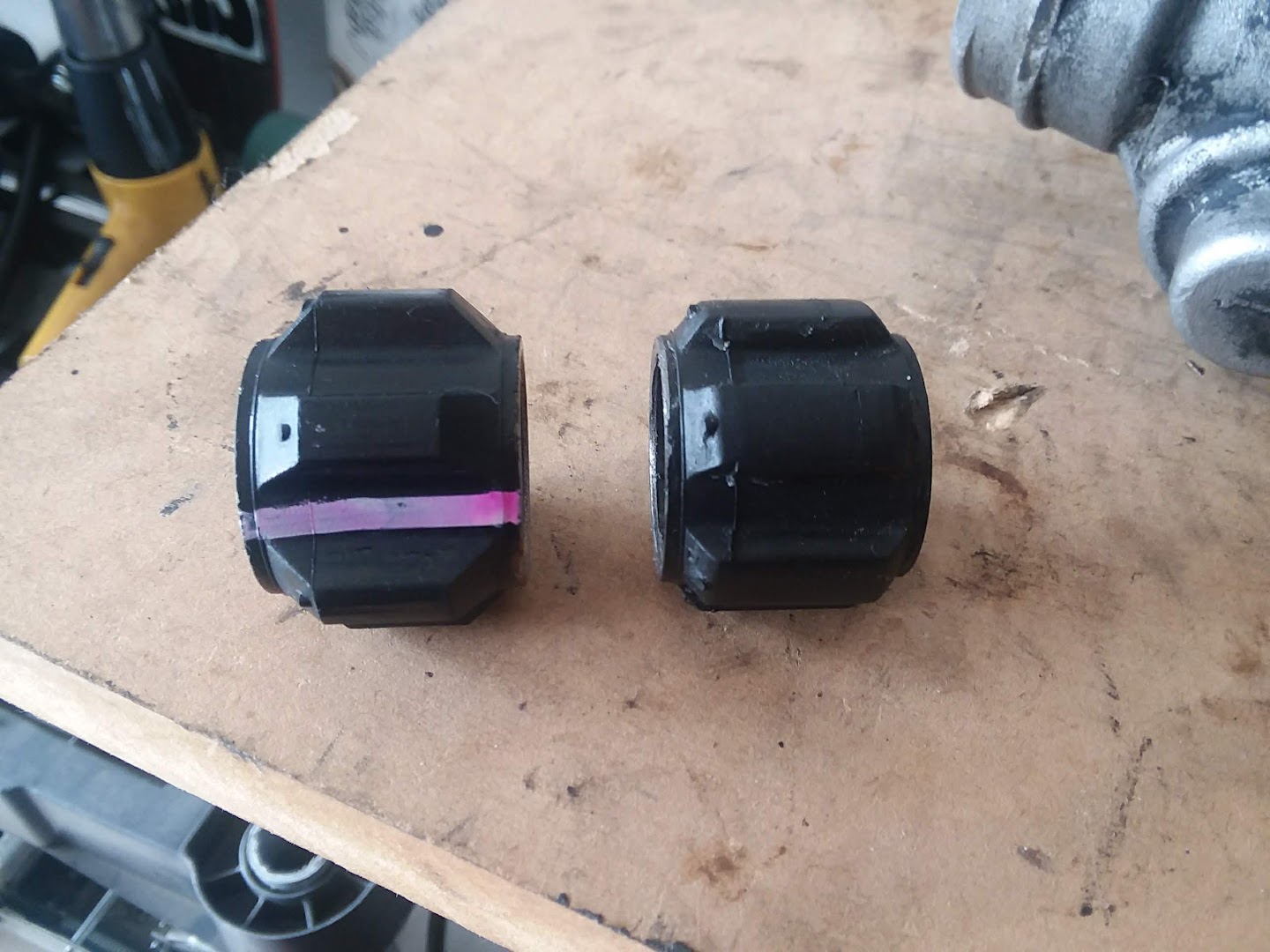 Or…was it? I figured there was a chance the ribs would squash down when I tapped it in with a socket and I still can’t believe they did, but they did. Maybe the old one was bigger before it was installed? Anyway, it worked. It’s maddeningly hard to get the bushing in square, but as long as it’s close it’s not an issue as the rack will straighten it out when you insert it. 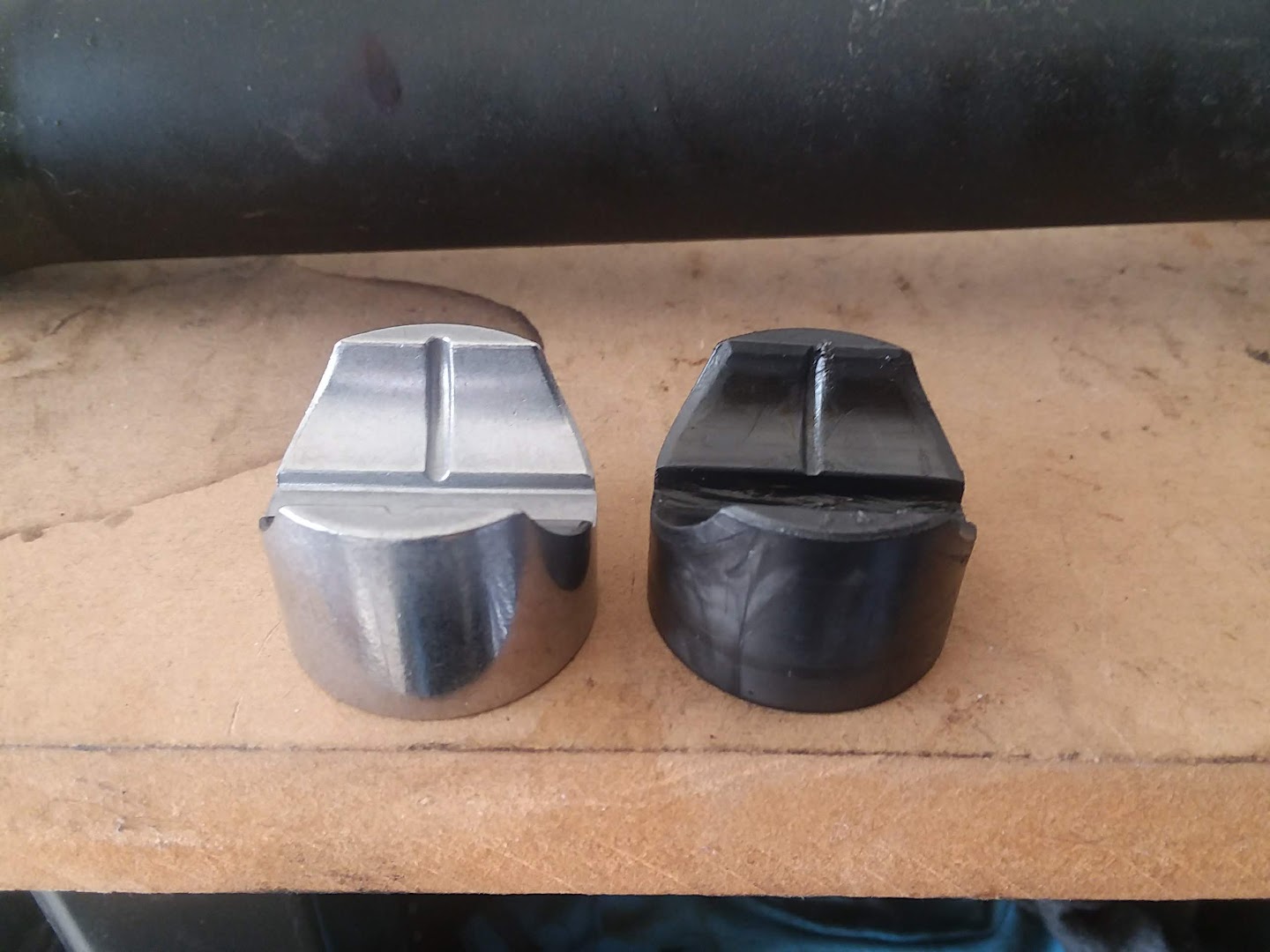 From there everything was pretty straight forward putting it all back together–I did have to guess what 0.5-1 ft/lb feels like as far as tension on the plunger, but the slight play/click is all gone and if feel great! I’ll probably regret reusing the old inner tie rods and the pinion shaft gear/bearing assembly, but both those were much more expensive and didn’t seem to be bad. I used to always do all the “while you’re in there” stuff, but working on cars where parts availability is a crap shoot and the original parts seem orders of magnitude better than aftermarket–and the whole process is not that time consuming, and I sometimes take “short cuts”. I hope this helps anybody that has steering issues–I suspect that rack bushing starts to allow a little slop between 150 and 200k on most cars. Most won’t notice, but if you do, it’s easy enough to fix

I feel bound by a commitment to full disclosure that after thorough testing I’ve found that none of the work I did had any effect on my steering wheel centering issue.

It is quite possible that there’s no way to run wide, sticky rubber and push the car without some of this, or it’s inherent to my custom fabbed coilover setup or? or? I did not try to fill the voids in the bushing with PU, as there just didn’t seem to be a good way to do that given I needed to grease it to slide it into the case.

I also find that if anything, while I definitely did get rid of a tiny amount of play in the worn bushing (no more click) that seemed like an inner tie rod issue (but wasn’t), there remains a few mm of play in the actual pinion gear. IDK if that means I need to cough up $127 for that assembly, but for now I believe it’s within spec so I’m just going to live with it and be annoyed.

So, it’s possible I’ve eliminated a possible tire-wear issue and the steering is not perceptibly worse. But it is also definitely no better. It’s exactly the same.

I think this is an external Suzuki block heater el[…]

Geo Metro Palooza is coming up early in Aug. Grea[…]

All things in time. If it happens again next year[…]